Atomic Tactical Cycling Subsonic Ammunition 5.56x45mm from Atomic Ammunition has built their company on four principles. Over the last several years Atomic Ammunition has conducted an extensive due diligence processes to come up with proprietary loadings for rifles and self-defense pistols. They utilized three of the most renowned independent test laboratories in the United States to reconfirm their findings and the safety of each load.

Atomic’ s Tactical Cycling Subsonic ammunition is specially loaded with Atomic’s proprietary and exclusive Tactical Subsonic bullets. These extra heavy bullets are over an inch long and are designed to tumble in soft targets resulting a massive entry wound, trauma and permanent wound channel.  These bullets will not tumble and result in baffle strikes in properly aligned and sized suppressors.  This ammunition is perfect for use with 5.56 or larger suppressors. Atomic’s 5.56 TCS has similar ballistic performance to 9mm/115 FMJ loads and more than DOUBLE the energy than any 22 LR subsonic load! Atomic’s  5.56 Tactical Cycling Subsonic ammunition is designed for close range tactical use, not long range match or hunting.  For best accuracy and results use within 25 Yards/Meters and in rifles with 1 in 7″ or faster twist rates. This ammunition is new production, non-corrosive, in boxer-primed, reloadable brass cases. 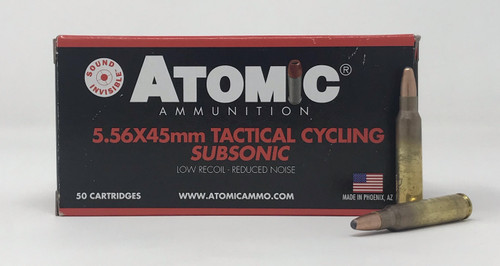